Maxims for Thinking Analytically by Dan Levy is a book about the teachings and wisdom of legendary Harvard professor Richard Zeckhauser1. The book is structured around 19 maxims that can help analyze problems and make better decisions. 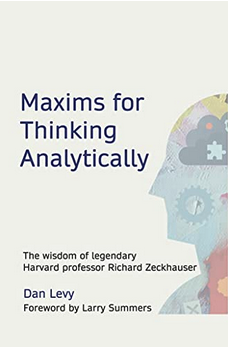 Maxims and, more in general, mental models are useful for two reasons:

A common theme for the maxims in this book is to “simplify your situation sufficiently to enable clear thinking and to give you some traction. Then turn back to your actual, more challenging situation, using the insights you gained.”

1. When you are having trouble getting your thinking straight, go to an extreme case

This maxim can be especially helpful to understand a concept, problem, or idea better. Also, to assess the best-case or worst-case consequences of a decision you are struggling to make.

“In order to get my thinking straight, I always found it useful to build a model and then drive it to the extreme. (…) Going to an extreme case can sometimes help you discover the key insight of a problem or situation you are trying to understand.”

2. When you are having trouble getting your thinking straight, go to a simple case

Occam’s razor or the law of parsimony states that the simplest explanation is usually the right one. Formulating a problem as a simple case is not easy, though.

Complement this maxim with the previous one.

The simplicity maxim is common sense, but not common practice. We sometimes get lost in the complexity of a problem to avoid the hard thinking needed to get to its core. “Models that can be translated into intuitive insights and be broadly understood can be useful.” A model that remains a mystery is not useful.

4. When trying to understand a complex real-world situation, think of an everyday analog

In tackling uncertainty, we sometimes use hindsight to try to make sense of events we never considered, much less predicted.

Big policy problems are often similar in structure to “smaller” problems that we face every day. The main difference is the number of people impacted. But if we see the analogue to an everyday example, we will be able to really understand the problem and then apply our intuition to the bigger problem.

5. The World is much more uncertain than you think.

Remember this next time you think an event has no chance of happening, or that some event will happen for sure. For example, “a policy that depends on accurate oil price forecasts is a policy in trouble…the range of uncertainty is impressive; it is so large that the uncertainty may be the most important feature of the analysis.”

6. Think probabilistically about the World

When searching for information regarding subjective probabilities, do not ask yes/no questions, because you’ll get either a yes or no for an answer. It’s better to ask what the chances are of something being either true or false.

Also, “it’s critical to know when to kill projects. Time and energy are scarce, and even if a project starts out strong, we should constantly be thinking probabilistically and updating our expected values. This is a hard but essential skill.”

7. Uncertainty is the friend of the Status Quo

Status quo bias states that “people disproportionally do nothing or maintain their current or previous decision, often when an easily assessable alternative would be superior.” For example, maybe you’ve had the same credit card for years, even when suspecting there are better alternatives.

This bias challenges the assumption of economics that humans are rational decision-makers who constantly make objective choices to optimize their satisfaction. “It is better to teach a person how to decide than to nudge a person to make the right decision.”

The key is to understand what information you had (or could have had) at the time you made the decision, and then determine whether given this information you chose a path that would maximize the expected value of your decision.

9. Some decisions have a high probability of a bad outcome

For example, you may invest $1,000 in a talented friend’s startup company. There is a good chance to go broke, say 90%. But if he succeeds your investment will be worth $50,000. It may be a good decision, despite the high possibility of a bad outcome.

10. Errors of commission should be weighted the same as errors of omission

Omission bias occurs when errors of commission tend to be weighted more heavily than errors of omission. What is intuitive is not always right.

One potential reason for omission bias: we often don’t know about the losses that arise from errors of omission.

11. Don’t be limited by the options you have in front of you

“Decisions sometimes require you to reject the options you were given, and to look for others.”

12. Information is only valuable if it can change your decision

If you have all the information you need to make a decision, go ahead and make it. Don’t need to wait for information if it’s not going to affect what you decide.

13. Long division is the most important tool for policy analysis

This maxim makes a simple but critical point: In assessing any policy measure in any realm, you should first determine what it achieves, and what resources it requires. With these tallies, you should then use long division, to compute output per unit of input.

“This maxim involves figuring out some metric of ‘bang per buck’ for different options, ordering these, and then choosing the options with the highest bang per buck until the bang becomes worth less than the resources required, or you simply run out of resources.”

14. Elasticities are a powerful tool for understanding many important things in life

Elasticity tells us how much we expect one quantity to change when another quantity has increased by one unit. Elasticity underpins a central principle of economics, to think at the margin.

15. Heterogeneity in the population explains many phenomena

Understanding heterogeneity is key to the design of sensible policies. “A policy that treats all individuals in the same way (…) is unlikely to reduce overall expenditures.”

These are situations where the value of one input depends on the availability of other inputs. Capitalize on positive cross-partial derivatives.

According to Ed Glaeser, “positive cross-partials are the hallmark of human existence. On our own, we are puny creatures who would fare poorly against any large carnivore in the wild. Our individual actions are only effective because they are supported by the actions of thousands of others – today and through history.” (p. 149)

One key application of this maxim arises when we choose a collaborator, for example in an intellectual project or in business. As Richard frequently argues, we often choose people whose skills are similar to our own. The result is that the gains from collaboration are much smaller than if we were to choose people who would bring different capabilities to the undertaking. If two engineers are planning the construction of a bridge, adding a third engineer to the team won’t help as much as adding an architect or a project manager.

“When you are an economic theorist, you gain more by collaborating with an empiricist than with another theorist. Similarly, if you are good at ideas and bad at follow-up, you should collaborate with someone good at follow-up.”

17. Strive hard not to be envious. See your Friend’s success as your gain

Envy is one of the most potent causes of unhappiness. “If we are constantly measuring our self-worth relative to the performance of those around us, we will always fall short.”

Learn to recognize and celebrate the success of others. Be generous with your time, advice, and support.

As decision-makers, we should not regret sound decisions that lead to poor outcomes. (Corollary: do not take pride in poorly made decisions that work out well.) “Realizing you made a mistake and taking action to correct it is good, but dwelling on the mistake does not do any good. Perhaps even worse, our desire to avoid regret in the future might lead us to make suboptimal decisions in the present.”

I believe that a conscientious attempt to banish regret from one’s decision calculus is one of the prime benefits of fully embracing decision analysis.

Anticipation of regret can lead to departing from rational decision-making:

19. Make pleasure-enhancing decisions long in advance, to increase the utility of the anticipation

Anticipation utility: Anticipating a future reward, such as an upcoming vacation, can sometimes be even more gratifying than the experience itself.

Auxiliary decisions can increase the value of your initial decision (though beware of not falling into the sunk-cost fallacy when doing so.) “Strive to make the right decision; afterwards, you’ll make your decision right.”

Other Brief But Important Life Maxims