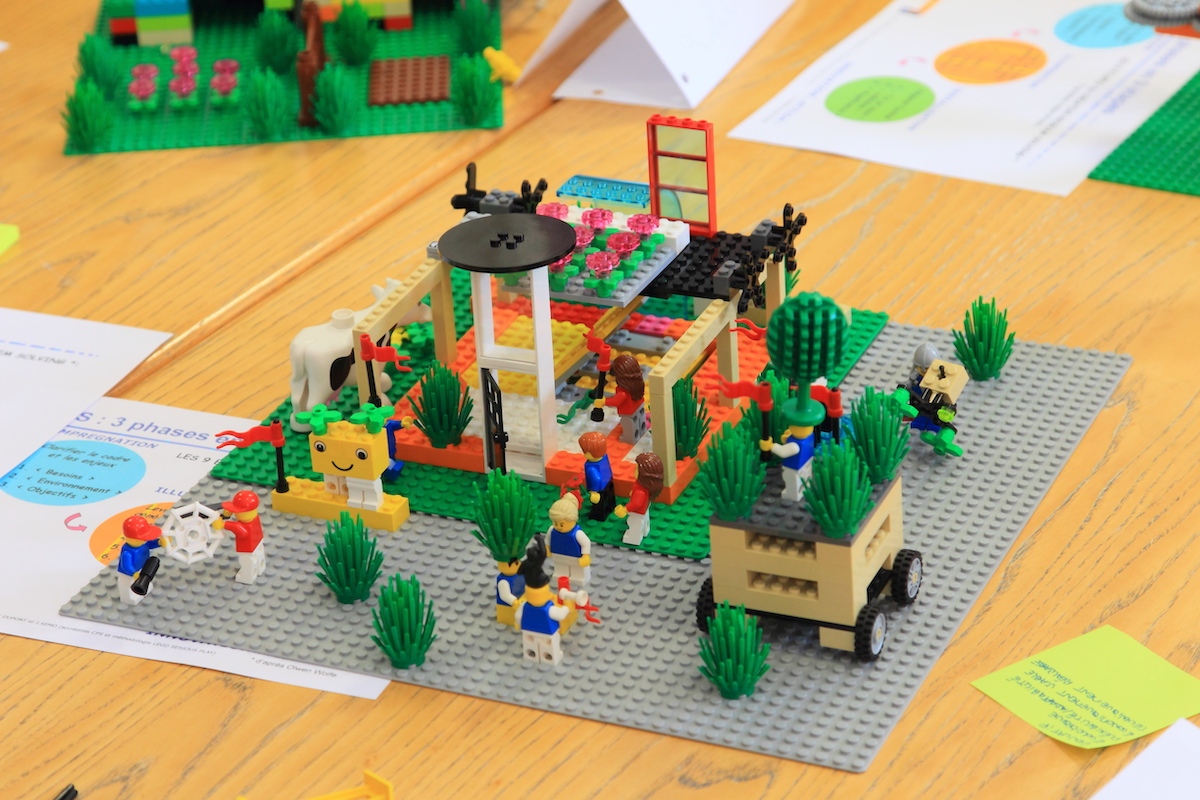 Kristiansen and Rasmussen have been deeply involved in the Lego Serious Play method since its inception. Lego Serious Play is a facilitation methodology created by the Lego Group, available since 2010 under an open source, community-based model. Its goal is fostering creative thinking through team building metaphors of their organizational identities and experiences using Lego bricks. Participants work through imaginary scenarios using visual three-dimensional Lego constructions, hence the name “serious play”.

Some ways that Lego Serious Play can help an organization are:

Going beyond 20/80 meetings and creating lean in. 20/80 Meetings are, as defined by the authors, meetings where 20 percent of the attendants take 80 percent of the meeting time. The attention density —how long we pay attention to something— is low.

Lego Serious Play can also help leaders unlock other people’s potential. Often, people are not aware of their knowledge on a given topic. A group of smart people eager to contribute don’t necessarily know how to form a solution. Leaders should help unlock the knowledge in the room.

Unlocking also means deepening the participant’s understanding of the system, and “creating a culture and process where there is an understanding that the organization needs to probe, sense, and then respond. (…).”, and helping them realize the connection (or disconnection) between each individual’s purpose and the purpose of the organization.

Breaking Habitual Thinking. Expertise in a domain can lead to using tested and proven patterns of thinking over and over again. While in most cases this can be seen as an advantage, in can hinder creative thinking and problem solving.

What is Serious Play?

The authors define Serious Play as play with an explicit purpose. A session of serious play is an intentional gathering to apply the imagination, where participants seek not to implement but to explore and prepare, by following a specific set of rules and language.

“The purpose of the systematic use of the LEGO brick is to make the models —not any individual present— the center of attention in the meeting.” Lego bricks are not used to convey answers but to unlock and construct new knowledge. There is no “right way”, every participant has the obligation to build a model and a right to tell the story of the model. The method encourages questioning the model and its story, not the person.

Papert, who is considered the “world’s foremost expert on how technology can provide new ways to learn and teach mathematics, thinking in general, and other subjects", saw conventional school environments as too sterile, too passive, too dominated by instruction. They didn’t provide or promote an atmosphere that allowed children to be the active builders that he knew they were1.

Constructionism involves two types of construct: when you construct things out in the world, you simultaneously construct knowledge in your head. “If we believe that we hold knowledge as structures based on our interaction with the world, then we can create knowledge faster and better (learning) when we are engaged in constructing a product or something external to themselves—a sand castle, a machine, a computer program, or a book. In short, ‘When you build in the world, you build in your mind.’” (p. 82)

Understanding the builder’s mind and in particular short-term and long-term memory plays an important role in Lego Serious Play’s foundations.

One could say that learning includes easily retrieving memory of new knowledge. But first you need to have something to retrieve; hence, encoding/formation stands out as an obvious first key stage in creating results with Lego Serious Play” (p. 100)

Focused attention is essential: when attention is divided, research shows, the hippocampus shuts down and no memory is formed. Techniques like distributing learning over time and chunking —simplifying knowledge in a way that it forms clusters of similar meaning and a pattern of understanding— can lead to significant improvements in learning.

Insights are fresh knowledge that comes in the form of surprising solutions to an often known problem. What does the brain need for insights to emerge?

Research shows, explain the authors, that before an insight occurs, the brain quites down. Fewer signals come in and there are fewer signals between different brain waves. Also, good mood makes it more likely to solve a problem with an insight, and therefore to form a strong memory. “It puts the brain in preparatory state.”

The Joy of Effective Learning

Nature gives us a special type of biological feedback that rewards appropriate learning activities. Mihalyi Csikszentmihalyi refers to this feeling as flow. “Flow is a condition in which we are completely engrossed in a game or task, lose our sense of time and place, and utilize our learning potential to the fullest.”

We arrive at the flow condition when our competencies and the challenge we face are in balance with each other. Lack of challenge leads to boredom, facing a too difficult challenge creates anxiety. We develop and become more competent as a result of experiencing flow: we have a high point experience, that is, we succeed mastering a challenge that initially felt too hard and out of reach. (p. 114)

“Imagination is the ability to conceive of what is not. Creativity is imagination applied.” Different types of imagination serve different purposes.

Making sense of things, or descriptive imagination, is used “to evoke images that describe the complex and confusing world out there.” It not only reveals what’s happening, but enables us to make sense of it and identify new possibilities and opportunities.

Creative imagination allows us to see what isn’t there (yet). It’s used to create something new and different. While fanstasy is the domain of the imposible, creative imagination focuses on possible realities and the making of reality.

With Challenging imagination we negate, contradict, and destroy the sense of progress that comes from descriptive and creative imagination. It starts from start and assumes nothing.

The Role of Play

Play is about process, work is about results. The purpose of Lego Serious Play is to use play to produce faster results.

The authors quote Johan Huizinga’s four-part definition of play: Play is fully absorbing, is intrinsically motivated, includes elements of uncertainty and surprise, and involves a sense of illusion and imagination.

Play is culturally, temporally, and spatially marked. Where, when, and how are clearly defined, for example, by freedom (you don’t have to play), separation (marking of time), non-productive orientation (no need to produce goods), rules (that help suspend reality, or normal real life), and factiousness (awareness that play is different from real life).

play is a transformative power—something that we all intuitively use while in childhood, and ought to use in adulthood as well. (…) This extension of play into adulthood is believed to be the basis of what Whitebread and Basilio called the ‘flexibility of thought which underpins the astonishing problem-solving abilities and creativity of humans.’ (p. 133)

I enjoyed reading this book very much, specially the sections explaining the method’s foundations. This book will provide a good insight into the Lego Serious Play methodology, although you’ll need a trained facilitator to apply it effectively.